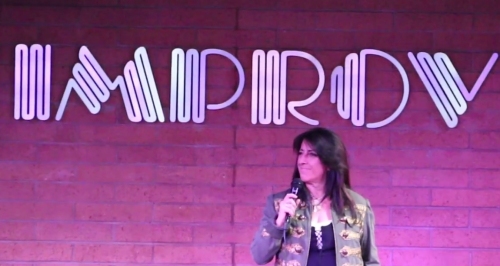 I don’t talk much about my past as a standup comic, but people have been asking lately so I thought I’d give a little background.

In January 1986, I took a job waitressing at Snickerz Comedy Bar in Fort Wayne, Indiana. Before too much time had passed, I was on stage and keeping up with the pros.

Snickerz was owned by a man named Kevin Ferguson and he hosted a weekly comedy talk show out of the club called Night Shift. I eventually became a comedy writer and opening act for the show. 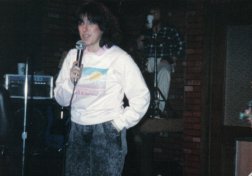 On the Night Shift stage, warming up the crowd.

While working at Snickerz with Kevin was a blast, Fort Wayne only had one comedy club and, if I wanted to be a professional comic, I would have to spend a lot of time on the road because that’s where the paying work was.

The problem was that I was a single mom with two kids. So, I moved to Chicago where I was able to work in town most of the time and take the kids with me during school breaks. At the time, they hated it, but now they admit that it was the best childhood ever.

While I was on the road, I was able to indulge my obsession with indie/used bookstores (and books about metaphysics). This is around the time that all of the bizarre psychic events I’d experienced up until then began to make sense (reading is a good thing, innit?).

In 1989, I met Jeff Sweeney, a Cleveland comic and we’re still together, 30 years later. Here’s a great story of how we met (talk about manifesting and Law of Attraction! this story was even featured in Amy Spencer’s book Meeting Your Half Orange: An Utterly Upbeat Guide to Using Dating Optimism to Find Your Perfect Match).

Over the years, I traveled the country working with comics like Tim Allen, Steve Harvey, Jeff Foxworthy and many, many others. I was a guest on numerous radio shows and was making great headway. I was headlining smaller rooms and featuring at A-clubs.

Eventually, Jeff and I moved the family to Los Angeles because we wanted to give Hollywood a try. Boy howdy, was that an adventure! Because I’m not a household name, you can probably guess that we were not successful there. Hollywood and my personality do not mix, so I quit doing standup after giving LA a couple years of my life. I finally said “Enough!” and moved on to other things, like becoming a news writer and affiliate producer for MSNBC.com and started writing books.

Fast forward a bunch of years, our family moved to the Phoenix area and my elder daughter ended up working at the Tempe Improv. This whetted my appetite to get back on stage again, so I gave it one more try, just for fun. You can read about that (and watch a video) here.

I don’t perform anymore … at least not at this point in my life … maybe someday. Now, I spend my time, comedywise, writing my metaphysical comedy novels about Lola Garnett and Twink, her fairy companion.

Lisa Bonnice is an award-winning, best-selling author. Her current passion-project is a series of metaphysical comedy novels. The first is entitled The Poppet Master (previously published as Be Careful What You Witch For!, now revamped and with a new ending). The Poppet Master is a modern-day fairy tale about Lola Garnett, a bored housewife and office drone who wakes up with unexpected psychic abilities, and no instruction manual, and Twink, the reluctant, sarcastic faery assigned to assist and educate her. The Poppet Master will be available in summer 2019. Its sequel is in the works.

Lisa is also writing The Maxwell Curse, a fictionalized version of a story she found in her own ancestral lineage about a witch trial, a generational curse, and massive mine explosion, all of which left ripples of destruction in their wake, devastating one family’s tree.

This entry was posted in Uncategorized. Bookmark the permalink.